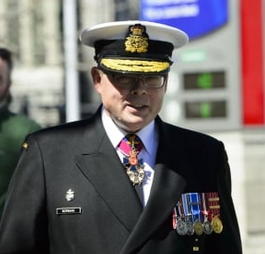 Who was at fault? According to the government, nobody — or maybe everybody

There’s a time-honoured tradition in Ottawa: when things go wrong — horribly wrong — somebody gets thrown under the bus.

The collapse of the criminal case against Vice-Admiral Mark Norman saw that custom accelerated at breakneck speed this week as the Liberal government sought to put as much distance as possible between itself and the failed prosecution.

The most prominent person among those tossed beneath the wheels is the country’s top military commander, Gen. Jonathan Vance, who — according to both Prime Minister Justin Trudeau and Defence Minister Harjit Sajjan — was the one who decided to suspend Norman in the first place.

“The chief of defence staff has full responsibility for the administration and command of the Canadian Armed Forces,” Trudeau told the Commons during question period this week.

Sajjan, who served under Vance in Afghanistan, also tried to steer blame toward the chief of the defence staff during marathon questioning Wednesday night related to his department’s budget.

“When the decision [to suspend Norman] was made, I supported it,” the minister said, citing the chief’s authority under the National Defence Act. “I have faith in the chief of defence staff to carry out his duties.”

Those remarks made it sound as though the minister was an innocent bystander who had no authority to question or challenge Vance’s decision.

That’s pretty ironic, since senior government officials have for months framed the prosecution of Norman, on allegations of leaking cabinet information, as an effort to reinforce civilian control over the military.

The commander of the navy, they argued, should never be allowed to usurp the will of the elected government of the day by agitating for a leased supply ship.

The notion that military men should be “limited to request[ing] and advising on needs” is seeded throughout the Crown’s factum in the Norman case, filed last December.

On Friday, Vance insisted that the decision to suspend Norman was his alone and was made without political direction or interference.

And beyond informing Sajjan and Trudeau of the RCMP investigation, the defence chief said, “I have never, ever spoken to anybody political about this, beyond that, ever. Period.”

There are some in Ottawa who will interpret that statement as Vance taking a bullet for the Liberal government — but the law does invest him with the authority to act.

Whether he should have acted so swiftly — whether he should have demanded to see more information from the RCMP in advance — is a question observers have been asking from the outset. But the calls have become louder since the Crown conceded it did not have all of the evidence when it decided to lay a charge of breach-of-trust against Norman.

“The main point to take away from all of this,” said retired lieutenant-colonel Rory Fowler, a former military lawyer now in private practice, “is that the CDS was not obliged to do what he did and, quite frankly, the decision had nothing to do with the Code of Service discipline. His decision was administrative in nature.”

Others being tossed under the bus this week include harried (and occasionally befuddled) civil servants whose slow, deliberate combing of federal government documents subpoenaed by the defence turned the court process into an extraordinary exercise in frustration.

Buckets of black ink were poured over the various records through redaction, apparently in the interest of preserving cabinet secrecy or solicitor-client privilege.