A majority of Canadians polled by the Angus Reid Institute say that the number of asylum seekers crossing into the country is too high, while a plurality point to Conservative Leader Andrew Scheer as the best major party leader to handle the issue.

The survey comes as the federal Conservatives and provincial governments put pressure on the Liberals to take control of what they’ve call a “crisis” — a sentiment that the poll suggests is also shared by a majority of respondents.

The poll — which was conducted between July 25-30 based on interviews with 1,500 members of the Angus Reid Forum, an online panel — suggests that the border issue is resonating with Canadians. Fully 70 per cent of respondents to the poll said they were either “following it in the news and discussing it with friends and family” or “seeing some media coverage and having the odd conversation.”

But despite the high level of interest, only 22 per cent of respondents were able to correctly identify the number of irregular border crossers in 2017. About half of the respondents thought the number was over 50,000, when it’s actually closer to 30,000.

Those who overestimated the rate of border crossings were also more likely to consider the situation a ‘crisis’ than those who either underestimated the number or gave the correct figure.

Nevertheless, once informed about the actual number of crossings, 65 per cent of those polled said they felt that it was “too many people for Canada to handle,” with only 29 per cent stating that it’s a “manageable number of people.” Just six per cent said they felt Canada could handle more border crossers.

The poll records that the share of Canadians who believe that the country has been “too generous” to asylum seekers increased to 58 per cent from 53 per cent since September.

By a margin of two-to-one, Canadians said that the situation is a crisis. The question polled, however, only gave respondents a choice between two statements — “Canada’s ability to handle the situation is at a limit,” or “The situation is being overblown by politicians and the media” — which leaves little room for nuance.

Ralph Goodale, the minister for public safety, has called the situation a “challenge”, though not one that the government is unable to handle. 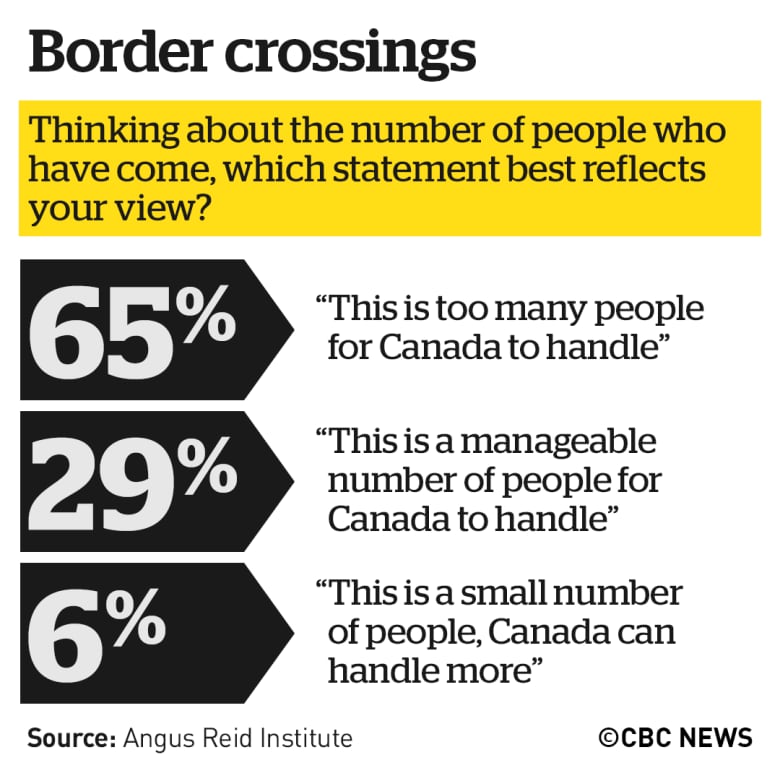 While 87 per cent of respondents who voted for the Conservatives in the last election called it a crisis, that percentage fell to 55 and 56 per cent, respectively, among New Democrats and Liberals. In Quebec, where the vast majority of the crossings have taken place, the percentage who said it was a crisis was no different than in the country as a whole.

The ARI poll suggests that the issue could be a political problem for the Liberals. When asked which major party leader they trusted most to handle the irregular border crossings, 48 per cent chose Scheer — including 30 per cent of people who voted for the Liberals in 2015.

Trudeau followed with 35 per cent, while NDP Leader Jagmeet Singh came in third with 16 per cent.

A recent survey by Abacus Data shows how the issue has the potential to seriously sap the Liberals’ re-election chances in 2019. Among the 57 per cent who said they would like to see a change of government, 42 per cent cited immigration/refugees as one of the reasons they want a change — second only to the issue of debt and deficits.

But the Abacus survey shows that the issue has particular resonance among voters on the right side of the political spectrum. A majority of voters who want change and who would consider voting for the Conservative Party listed immigration and refugees as one of their top motivating factors. Only a quarter of potential NDP voters said the same.

The Angus Reid Institute survey suggests that Canadians want to see more of a priority placed on border security than on welcoming and assisting refugees. It also shows some doubts about the legitimacy of those asylum seekers, particularly among Conservatives.

But only 27 per cent of Liberal and NDP voters say that the border crossers are mostly economic migrants — compared to nearly two-thirds of Conservatives who say they believe that’s the case.

The vast majority of respondents said that “assigning police, immigration officers and technology (such as drones) to monitor and secure the unguarded areas of our border” is an important or major priority, while the country was split down the middle on whether “getting new arrivals safely into Canada and providing medical, housing and other needed assistance” was an important priority.

According to Immigration, Refugees and Citizenship Canada, the RCMP intercepted just under 11,000 people at irregular border crossings in the first six months of this year. In June, the number of irregular crossings dropped to 1,263 from 1,869 the previous month.

The survey by the Angus Reid Institute was conducted July 25-30, 2018, interviewing 1,500 members of the Angus Reid Forum over the Internet. A probabilistic sample of this size would yield a margin of error of +/- 2.5 percentage points, 19 times out of 20.

Éric Grenier is a senior writer and the CBC’s polls analyst. He was the founder of ThreeHundredEight.com and has written for The Globe and Mail, Huffington Post Canada, The Hill Times, Le Devoir, and L’actualité.